When you have over 99,000 followers on Facebook, could you be doing anything wrong?

Unfortunately, the answer is yes! Even big brands can sometimes (ok, often) do things better.

This week, I happened to visit the Facebook profiles of three big Pharma brands: GSK, Pfizer and Novartis.

While much of the content was genuinely interesting, one thing hit me straight away. On all of the pages, the brands’ names kept on coming up again and again.

GSK was the worst offender. Of 7 posts so far this month, 5 explicitly referred to GSK, its products, history or its research. For example, they directed people to a website on colds and coughs, which they are supporting “through our Beechams and Night Nurse brands”; under an illustration of a floating laboratory set up by their heritage company in 1907 to research neglected tropical diseases, they added, “We continue to carry out research into NTD.”

(That’s quite a mouthful….)

Meanwhile, Novartis was boasting about its record in carbon emissions and its “50-year legacy of innovation in cardiovascular disease”. All three of the enormously touching pictures of children affected by meningococcal disease were prominently labelled, “sponsored by Novartis Vaccines”.

So what’s the problem?

Surely that’s why the Facebook pages exist – to promote the companies? Well, yes. But the worst way to do it is to constantly refer to yourself.

It’s the cardinal rule of social media. Readers are not interested in reading about your company; they are interested in the insight and advice you can offer them in your area of expertise.

When you talk about yourself, you’re like the guy at the cocktail party who drones on about his own life. You’re a bore.

When you address your readers’ problems, you’re a valuable source of knowledge.

It wasn’t always that way: before the internet, before readers had wide access to information, companies promoted themselves by talking about their products and its features. Consumers appreciated it because they had few other ways to learn about what you were offering, and that’s still the way most companies advertise on television, on billboards and magazines.

But online, when readers can flip to another page with one click, and when you have perhaps two seconds to capture their attention, you really need to be writing about things that appeal directly to them – or risk looking pushy and self-promotional.

This doesn’t mean you can never refer to yourself, but you must do so sparingly – perhaps one in six posts.

The big Pharma companies above have done a lot right. First of all, they have embraced new media.

And as I said above, much of the content is really good. There are educational posts about various illnesses, tips from patients about managing their condition, portraits of doctors doing unusual work, and insight into technological developments in the sector. They all use striking imagery. Pfizer showed just how to combine relevance, interest and emotional heartstrings by using Black History Month to showcase pictures of African-American trailblazers in science and medicine.

The instinct to spoil all this by constantly bringing the conversation back to themselves is like a nervous tic, left over from the old way of marketing. It’s as if they’re worried that if they don’t constantly point out how great they are, the readers won’t get it.

They’re wrong. If the material they post is useful, informative or fun, readers will quickly come to associate them with expertise and quality. Right now, they risk turning a lot of readers off. Witness the stream of abuse under Novartis’s post from the end of January, linking to its financial results, or under GSK’s post celebrating the fact they had just joined a programme to develop new treatments for Alzheimer’s. 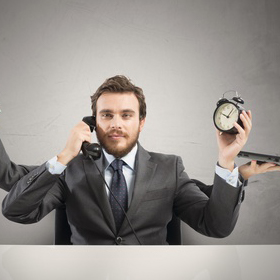 How much time does social media really take? The brutal truth